The nice folks at literary crowdfunding site Pubslush have just featured an excerpt from Silent Symmetry on their blog, accompanied by a rather romantic photo. I didn’t write that title, by the way!

I’ve written before on this blog about how cool it is when real-world science intersects with the sci-fi fantasy that I write. Now here’s an example that really warms the cockles of my brain:

“Over the past few years, the European robin, and its quantum “sixth sense”, has emerged as the pin-up for a new field of research, one that brings together the wonderfully complex and messy living world and the counterintuitive, ethereal but strangely orderly world of atoms and elementary particles in a collision of disciplines that is as astonishing and unexpected as it is exciting. Welcome to the new science of quantum biology.”

I’d never heard of quantum biology when I wrote the following line in my soon-to-be-published YA novel Starley’s Rust: “…the mental gateway between you and the Embodied works through quantum fluctuations in your brain.”

I certainly didn’t want to make my beings telepathic in the traditional paranormal sense, because the trilogy has a true sci-fi base, so I needed an explanation for how they could “get inside” a human’s mind. But it turns out that were the Embodied to exist (and who’s to say that they don’t!?), they could actually communicate with humans using a quantum mechanism like the one that robins use to navigate:

“Studies of the European robin suggest that it has an internal chemical compass that utilises an astonishing quantum concept called entanglement, which Einstein dismissed as “spooky action at a distance”. This phenomenon describes how two separated particles can remain instantaneously connected via a weird quantum link. The current best guess is that this takes place inside a protein in the bird’s eye, where quantum entanglement makes a pair of electrons highly sensitive to the angle of orientation of the Earth’s magnetic field, allowing the bird to “see” which way it needs to fly.”

The Embodied trilogy’s genre is either urban fantasy or soft sci-fi, but when I read an article like this I wonder whether it might even be regular sci-fi. Or even plain old sci.

Quick post to show off the one-month-to-publication ad for Starley’s Rust. Pre-order from Amazon by clicking on the ad or from Apple by clicking here. 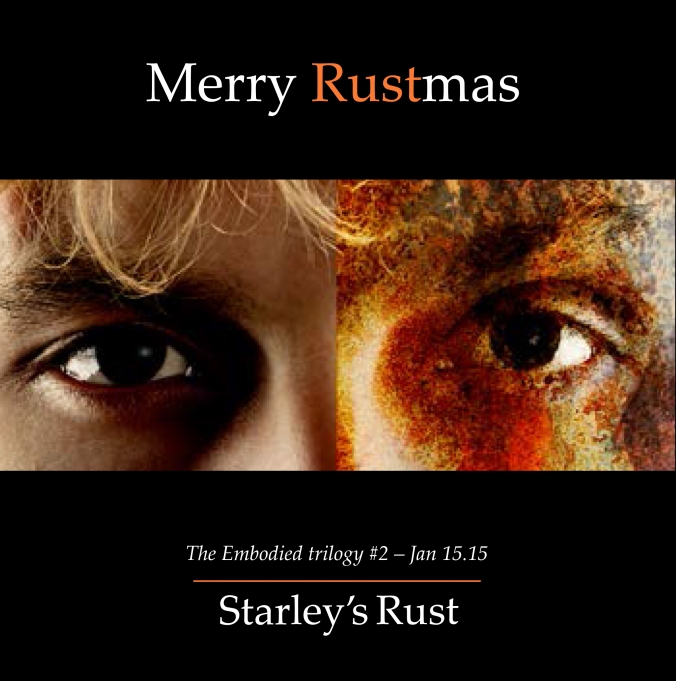 Just a quick Sunday post to say that book 2 of the Embodied trilogy, Starley’s Rust, is now available for pre-order from Apple’s iBookstore. Just click on this pic to get the iBook! 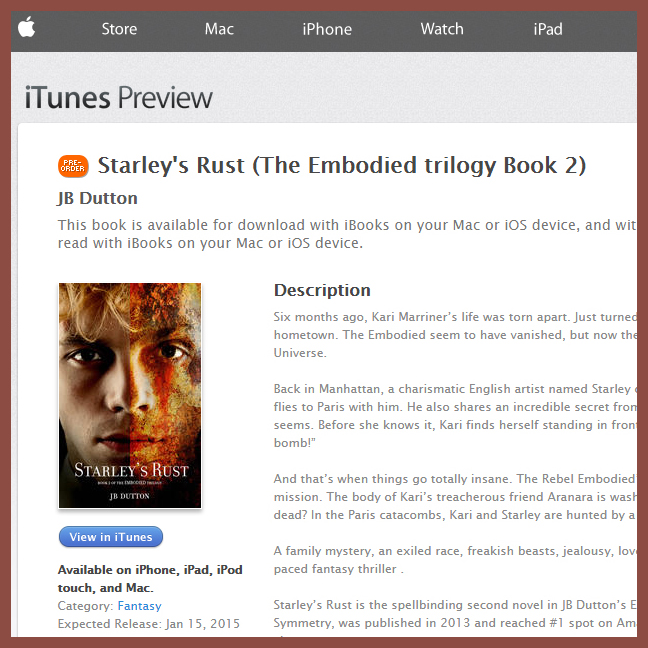 Readers like to read and writers like to read. But writers like to write too, which leaves less time for reading. It’s a humdrum conundrum really, but one that I’m faced with now. I’m currently reading six (yes, 6) books. They would be, in no particular order: Life by Keith Richards, The Moonstone by Wilkie Collins, Chez l’arabe by Mireille Silcoff, Falls the Shadow by Stefanie Gaither, The Unbecoming of Mara Dyer by Michelle Hodkin, and For Whom the Bell Tolls by Ernest Hemingway.

Call me an idiot. Go on, I know you want to. Thank you.

But the fact is, I just can’t help it. I don’t pick up a new book because I’m bored with the one(s) I’m already reading but because I’m excited to get to know the new stranger that has appeared on my doorstep/shelf/Kindle. 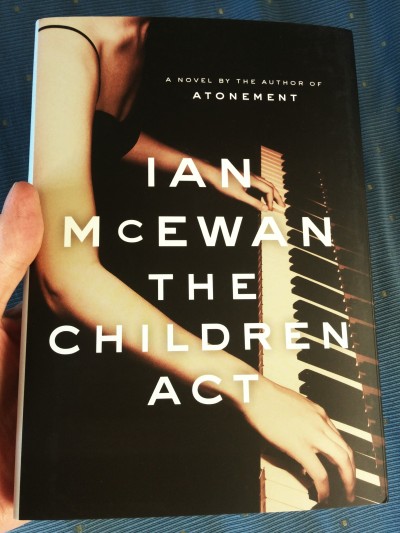 And now today the mailman brings this. Why, oh why did I order it? Ian McEwan is one of my favorite writers, so why did I think I’d be able to resist adding this to my TBR pile (that’s a To-Be-Read pile for those who don’t have this particular reading disorder).

And yet… the wonderful thing about my problem is that each night I get to spend some time in the company of whoever I feel like. Yes, I’m treating these books like people. Maybe it’s because I’m an author, but I can’t help over-shooting the story itself and landing smack in the middle of the writer’s mind. Obviously with Keith Richards’ autobiography, that’s normal, and Mireille is one of my friends, so in her case I can’t help it, but there are two dead white guys in that pile and yet still I experience an inescapable, almost tangible connection to them. No, it’s more than tangible. I could have a drink in a pub with Wilkie Collins, were he not far beyond moldering, and that would be cool. But no matter how buddy-buddy we’d become over our Guinness (or the Victorian gentleman’s drink of choice – probably Guinness) I don’t think I would get as much of a feeling for what makes him tick as when I’m tucked up under the covers with him (if you get my drift).

Isn’t that the beauty of literature though? If it’s done properly, not only do we get transported to a fictional world, but we also mainline the author’s mind. Even if you’re reading about Hannibal Lecter, Thomas Harris’s personality seeps through. And this is an odd thing, because I suspect he’s not a psychopathic killer. Shakespeare’s oeuvre covers a vast range of realities, but whether they’re historical tragedies or fantasy comedies, you’re still – when reading the plays more than watching them – in the Bard’s head.

So yeah, I like hanging out with great writers. The more the merrier. And speaking of merrier, the Bard’s Head would be an excellent name for an English pub. Maybe that’s where I’ll have that Guinness with the ghost of Wilkie Collins one day.

There’s a reason you can see me wearing a thick sweater in this photo. It’s because here in Montreal it’s -23C (that’s MINUS 9 DEGREES FAHRENHEIT!!) with the wind chill this morning. But am I cold? No, and it’s not because of the sweater. It’s because my heart has been warmed by the arrival of the paperback proof of my new novel. It’s basically like Christmas came early. And I can tell you, not only does Starley’s Rust look good, it feels good too!

The first thing I did was take a photo of it. Does this count as a selfie? Have I become an Instagram junkie? Do I care? Heck, no! In fact, I then raised the stakes by taking a double selfie. For the first time, ladies and gentlemen (and young adults), here are the first two books in the Embodied trilogy, side by side. As you all know, I’m a big fan of ebooks. But the one thing they lack is being able to weigh them in your hand, then feel the glossy cover and the smooth white pages inside. And if it gets much colder, I can also use them to start a fire. (Current societal practices dictate that I insert “LOL” here.)

Now I’m back sitting at my desk – which of course isn’t work – and I’m basking in the glow from Starley’s Rust. It’s a lovely day…

Cyber Monday is half over and I’m very disappointed that no travelling Cybermen have turned up at my door offering their cyber wares. I could really do with a nice new cybermat to wipe my shoes on. Oh well, I guess I’ll do my bit for the economy instead. It’s the last day of the Silent Symmetry Kindle ebook Holiday sale. You can give ebooks as gifts, you know. Just saying… 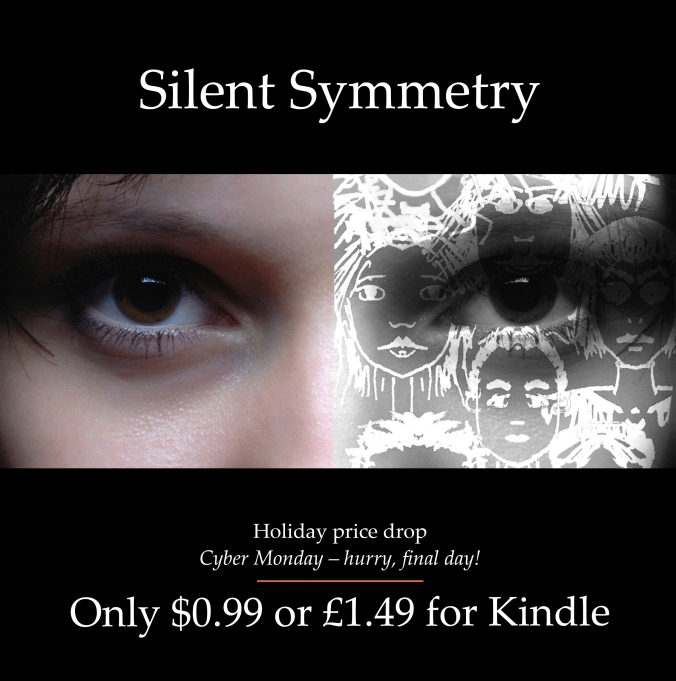